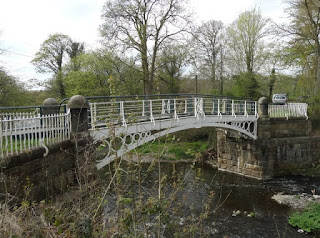 A slightly larger than normal group of 11 walkers started the 3.5 mile circular route from Brabyns Brow Park in Marple Bridge. The walk took us past the site of the demolished Brabyns Hall which had been used as a military hospital in the First World War. We followed the course of the River Goyt, taking time to look at a discarded foundation stone from Monsal, to stop and admire the listed Iron Bridge. This was built in 1813 by the Salford Iron Works. A team of Friends of The Park were hard at work on keeping it free from weeds. We took a short diversion to look at the point of confluence of the rivers Goyt and the Etherow before crossing the river at Compstall and continuing into Redbrow Wood. After heading across farmland we reached the steps leading up to the Marple Aquaduct which is 100ft above ground level. Following the Canal, we passed the start of of Marple’s 16 locks and descended a path back to Brabyns Park. After the interesting walk the group adjourned to The Railway pub in Marple for lunch.