We left St. Paul’s Church under a threatening sky towards the beautiful village of Barley in Lancashire only to find the rain had set in on our arrival about an hour later.


Six of us left the car park for the old water works building which now boasts a glorious conversion to apartments.Next over the footbridge to our first climb of the day over a rather boggy, clumpy set of fields. As expected, the path proved a little difficult to follow here but after a bit of team work, we were back on track passing a farmhouse and over the hill towards Newchurch, The village is famous for its ‘Witches Galore Shop’ and usually has three old stuffed crones sitting outside but their absence probably reflected the extreme weather conditions that proved too much, even for them! Originally the village was called Goldshaw Booth but the Newchurch name came into use in October 1544 when John Bird, Bishop of Chester, consecrated the new church of St. Mary. Prior to that, there had been a chapel recorded on the site of the current church since 1250.There is an oval set in the west face of the tower known as the ‘all seeing eye of God’, reputed to protect the villagers from evil.

This and other surrounding villages are, of course, famous for their ‘witches’ who suffered the trials in Lancaster Castle following various reported activities which were put down to their craft.
We escaped the rain by sheltering inside the church where we were greeted by a couple of ladies who had, following the cancellation of their village flower festival, decided to provide coffee and homemade cake for anybody crazy enough to venture out in such dire conditions.As we dried our gear and settled down to coffee and cake, they explained how the church had become part of the Blackburn Diocese only in 1926, so we said we would think of them in 2026 when they would be celebrating their centenary within the diocese.

Much as it would have been lovely to spend all day in the church, we set off in intrepid fashion along the road towards Sabden Fold, past the Shekinah Christian Centre.Then came our second climb over Driver Height which is not only terribly steep, but tantalised us with many false summits before reaching the top, made all the more ‘fun’ by the driving rain.Despite all these forces working against it being a nice walk, everybody came together in camaraderie fashion and decided this was a good place to take numerous photos of the group,  while we tried to stumble our way down the steep drop toward the reservoir. Then along the easiest  part of the walk back to Barley following the reservoir.

We passed Pendle Hill which is, of course, famous for George Fox who experienced his vision there which led to his forming The Quaker Movement.

Back at the car park, we dried off and headed for ‘The Barley Mow’ who welcomed us with some very good food.

A great day and turnout considering the weather, though maybe the next one should be planned for a nice hot summer’s day. 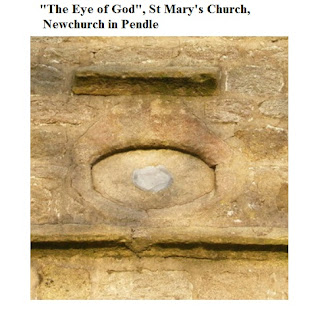